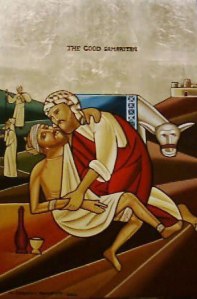 When I started school, grade one to be precise, in Frontenac County in 1967 religious instruction was still part of the public school curriculum. While my family was Roman Catholic at the time, my mother and father were public school supporters. I recall every morning my teacher, Miss Boss, would read us a Bible story as part of our morning opening exercises. One of the first stories I remember she read to us was that of the parable of the Good Samaritan. At the time the nuances of the story were lost on me; it served as a basic moral lesson for me and my classmates that the Samaritan had done the right thing in helping the injured man, unlike the Priest and the Levite. Likewise so should we if confronted with a similar circumstance. It was not until many years later when I was a student at Queen’s University that I came to understand the story and the moral more fully.

As I understand it, at the time Christ delivered the parable, Samaritans were reviled by mainstream Jews for their “otherness.” Samaritans were despised for differences in doctrine and ancestry and were ostracized by mainstream Jewish society. Priests and the Levites, on the other hand, were regarded as good and righteous for their rigid adherence to the dictates of the Torah and likely held themselves in this regard. They were very righteous in ignoring the plight of the injured man, because they were prohibited by the Torah from having contact with a dead body. They walked by the injured man, believing him to be dead or moribund, to avoid the risk of ritual uncleanliness. The Samaritan saw a fellow human being in distress and offered assistance without hesitation.

Presumably the injured man was Jewish, someone who despised Samaritans, who found himself given aid and comfort from someone he would otherwise have avoided. Did it matter to the injured man in the parable that his rescuer was a Samaritan? Should it have? It is interesting too that in helping the injured man the Samaritan does not seek a reward or lauds from others for his act of charity. He leaves the injured man at an Inn, pays the Inn keeper and promises to return to settle up if in convalescing, the man stays longer than for his rescuer has paid. A true act of charity is anonymous and rooted in genuinely wanting to help someone in need.

The parable illustrates how legalism and self-righteousness can cause one to become callously uncharitable. Pope Francis touched on this reality in his recent pronouncements concerning gay people in which he stated:

They do not choose their homosexual condition; for most of them it is a trial. They must be accepted with respect, compassion, and sensitivity. Every sign of unjust discrimination in their regard should be avoided. These persons are called to fulfill God’s will in their lives and, if they are Christians, to unite to the sacrifice of the Lord’s Cross the difficulties they may encounter from their condition. (as cited in Pope Francis on Homosexuality: a Look Beyond the Headlines)

The tone of his remarks indicates Pope Francis has not strayed radically from Church teachings on homosexuality–it is still viewed as a condition–but stresses that Christians and the wider society ought to take a more charitable attitude toward gay people.

In a similar vein, Dr. David P. Gushee, a Protestant ethicist from the United States observed:

As an evangelical Christian whose career has been spent in the South, I must say I find it scandalous that the most physically and psychologically dangerous place to be (or even appear to be) gay or lesbian in America is in the most religiously conservative families, congregations and regions of this country. Many of the most disturbing stories in this volume come from the Bible Belt. This marks an appalling Christian moral failure. (as cited in Religion-Based Bigotry)

“Plus ça change, plus c’est la même chose” reads the French proverb, more commonly read in English as “The more things change, the more they stay the same.” So it is in the present, just in the time of Christ when Samaritans were reviled for their “otherness” and perceived deviation from rigid adherence to religious doctrine, gay people find themselves so regarded by those who perceive themselves the more “respectable” elements of society on religious grounds. As a gay man I live with this reality, but try to take it in stride.

Much like the Samaritan in the parable, I try to do the right thing and extend charity to those around me in need anonymously. I am no better or worse than anyone else and find it encouraging that men like Pope Francis and Dr. Gushee are taking to heart the teachings of their respective Churches on the pitfalls of legalism and self-righteousness and reminding those to whom they minister of the importance of avoiding these pitfalls. While I realize they will not reach everyone with their admonition, I remain hopeful that attitudes toward gay people among Christians will become more charitable. Time will tell.

1 thought on ““Accumulating orthodoxy makes it harder year-by-year to be a Christian than it was in Jesus’ day.” ― Brian D. McLaren”