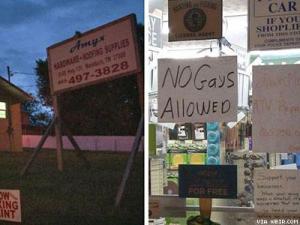 “No shirt, no shoes, no service,” how often do I find a sign with these words posted when I approach the entrance to a restaurant or shop. There are hotels, bed & breakfasts, resorts and housing developments that refuse to allow children. I remember in 1968 my mother and father were asked by owners to leave their bed & breakfast in Cheltenham, England because other guests did not like that there were children on the premises. I remember back in 1987 when I was a student at Wilfrid Laurier University trying to find a place to live in Kitchener-Waterloo. It was a very tight market for student housing and for one of the ads I answered was told curtly by the voice on the telephone “we only take girls.” In 1989 back in Ottawa as I browsed ads in the newspaper for shared accommodation, I noticed more than a few that included the phrase “straight only.” People discriminate against others in the marketplace for various reasons, and in many cases, such as those listed above, it is lawful to do so, while in others it is not. The question is what is the appropriate response if you find yourself confronted with a situation when you think you are the butt of either unjust or unlawful discrimination.

In the case of the bed & breakfast in Cheltenham, my mother and father calmly found another hotel for us to stay, a hotel whose owners lived in their hotel with children of their own. We stayed at this hotel until the bungalow my parents rented was ready for us to move in. I remember one day, as we were out shopping in Cheltenham, running into one of the owners of the bed & breakfast from which were evicted. He smiled at us, and we went our separate ways. Nothing was said. As for the “we only take girls” affront in Kitchener-Waterloo, I remember finding this aggravating and thinking “discrimination on the basis of sex is illegal,” but at the time I still needed to find a place to live and what was I going to do about it: call a cop? I said “okay” and continued my search for a place to live, finding one eventually. Similarly, when I spied the shared accommodation ads in the newspaper in Ottawa with the “straight only” phrase included, I dismissed them and kept on looking. In due course, I found a place to stay without any trouble. In the case of the landlord in Kitchener-Waterloo who told me “we only take girls” and the shared accommodation ads in the Ottawa newspaper with the “straight only” phrase included, I did not bother to inquire as to what grounds were the basis for their decision to discriminate against men and gay people. Instead, I accepted it as one of life’s petty injustices and moved on.

On the question of discrimination in the marketplace, the issue of discrimination on religious grounds is fanning the flames of controversy concerning gay people, notably regarding the issue of marriage equality. In a few recent cases bakers, florists and photographers turned away gay and lesbian couples who sought to hire them to cater to their marriage ceremonies. The proprietors of these businesses who preferred not to take part in the marriage ceremonies cited their religious objection to same-sex marriage as grounds for refusing them their business. In turn, they were accused of unlawful discrimination on the grounds of sexual orientation and subject to lawsuits by the aggrieved parties. In one of these cases, Aaron and Melissa Klein, owners of the Sweet Cakes Bakery in Oregon, were fined $135,000 by the Oregon Bureau of Labor and Industries because they expressed their preference, citing religious grounds, not to bake a wedding cake for a lesbian couple, Rachel and Laurel Bowman-Cryer. In handing down its judgement, the Bureau of Labor and Industries stated:

The facts of this case clearly demonstrate that the Kleins unlawfully discriminated against the complainants. Under Oregon law, businesses cannot discriminate or refuse service based on sexual orientation, just as they cannot turn customers away because of race, sex, disability, age or religion. Our agency is committed to fair and thorough enforcement of Oregon civil rights laws, including the Equality Act of 2007. (as cited in KGW.com)

Rachel and Laurel Bowman-Cryer, the complainants, in this case, said “this has been a horrible ordeal for our entire family. We never imagined finding ourselves caught up in a fight for social justice. We knew it was on us to set an example for our two kids – to stand up for what is right.” (As cited in KGW.com) As for Aaron and Melissa Klein, the owners of the bakery, they maintain their right to freedom of conscience and freedom of expression were violated in the judgement against them and vowed to fight it. As Melissa Klein noted on her Facebook page following the decision:

This effectively strips us of all our first amendment rights. According to the state of Oregon we neither have freedom of religion or freedom of speech. We will NOT give up this fight, and we will NOT be silenced. We stand for God’s truth, God’s word and freedom for ALL Americans. We are here to obey God not man, and we will not conform to this world. If we were to lose everything it would be totally worth it for our Lord who gave his one and only son, Jesus, for us! God will win this fight! (as cited in KGW.com)

2 thoughts on “If a couple of gay guys want to throw the gayest, most fabulous wedding of all time, the only way it should offend you is if you weren’t invited. ― Orlando Winters”