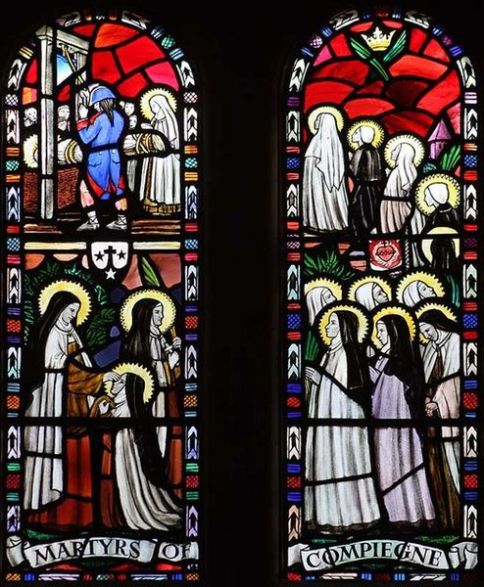 I have a passion for the study of history and for music. I love learning about the past and listening to music from across the ages. Occasionally the two passions become congruent as is the case of the opera by Francis Poulenc (1899-1963), “Dialogues des carmélites” (Dialogues of the Carmelites), composed in 1956. The opera is a fictionalized account of an order of Carmelite nuns who were executed during the Reign of Terror in the French Revolution and are remembered as the Martyrs of Compiègne.

The French Revolution, as you probably know, was a rather bloody affair. The Reign of Terror (5 September 1793 – 28 July 1794) saw many thousands of people condemned to death at the guillotine, the “machine” as it was called at the time. It was a period in which anti-clericalism, that is an effort to rid the new society of Christianity was underway. Before the revolution, the Roman Catholic Church was the largest landowner in France and had taxing power in that it had the legal right to collect tithes. The Church was one of the institutions of the Old Regime and as such the revolutionaries sought to sweep it away along with the monarchy and the aristocracy. Maximilien Robespierre (1758-1794) is the most recognizable figure associated with the Reign of Terror. Robespierre was influenced by the ideas of the Philosophes: Voltaire (1712-1778) and Diderot (1713-1784) are notable examples. While Voltaire was highly critical of the Church, he favoured religious tolerance having said: “of all religions, the Christians should of course inspire the most tolerance, but until now Christians have been the most intolerant of all men.” Whereas, Diderot is quoted as saying “men will never be free until the last king is strangled with the entrails of the last priest.” Robespierre was as anti-clerical as they come. The Civil Constitution of the Clergy, a law passed in 1790, outlawed monastic orders. Robespierre wanted to rid the French society of Christianity and replace it with a civil religion he called the Cult of the Supreme Being.

The good Sisters of Carmel of the Annunciation in Compiègne lived in a cloister, devoted to prayer and contemplation and depending on charity for their living. When confronted with the order to disband their monastery, following the imposition of the Civil Constitution of the Clergy, having been turned out of their monastery on September 14, 1792, they refused. They continued their religious life in Compiègne offering their lives to God in the hope this would help bring peace to France and to the Church. They were found out, arrested, and imprisoned in Cambrai on June 24, 1794. They were taken to Paris and held in the Conciergerie prison. On July 17, 1794, the sixteen Carmelite nuns were put before the revolutionary tribunal, having been charged conspiring against the Republic. They were ridiculed by the Public Prosecutor Antoine Fouquier-Tinville for their “childish, beliefs, [their] stupid religious practices.” They were convicted by the tribunal as enemies of the people and sentenced to death by the guillotine. They met their fate calmly the same day, true to their faith, singing the Miserere, the Salve Regina, and the Te Deum. Their names are listed below:

The martyrdom of the sixteen Carmelite nuns that day is dramatized in Poulenc’s opera. The final scene in the opera shows the nuns escorted to the guillotine as they sing Salve Regina. One by one the nuns are escorted off stage, and as the sound of the knife on the guillotine falls, there is one less voice heard singing until finally the last voice is stopped, leaving a chilling silence. I know it is wicked of me, but when I first heard this opera performed during a broadcast on radio from the Metropolitan Opera House in New York City, I could not help but think of that campfire song about bottles of beer on the wall: “if one of those bottles should happen to fall…” But seriously, the fact that out of the many thousands of victims of the Reign of Terror, the names of these sixteen Carmelite nuns and their sacrifice is remembered and commemorated is worthy of note.

The fact is they were the last victims of the Terror. It is held by some that it was in standing true to their faith and accepting death on baseless charges of treason, that the French finally had enough of the Terror and rose up against Robespierre who was deposed and guillotined on July 28, 1794. Whether this is true or not, it is good to think of these women and remember their executioners had only the best of intentions. Robespierre took the ideas of the Enlightenment, particularly its emphasis on the application of reason and applied them in a most “corrupt and fickle” way. Despite his effort to rid French society of Christianity, the Civil Constitution of the Clergy, the law by which the Carmelite Sisters were condemned to death, was repealed in 1801. Churches, Catholic and Protestant, still have a presence in French society. In the 21st century, there is still a place for Christianity in France and the rest of the Western World. Unlike the Middle Ages, Churches have a seat at the table, one of many voices, rather than the central place. Christianity will be with us for a long time to come, and as it survived the turmoil of the French Revolution and adapted to the new society, we can hope Churches continue this trend.