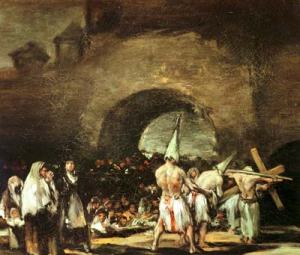 I took the time to comment on a Facebook thread, the premise of which was, that Western nations should discontinue immigration from the Islamic world. I do not think this course of action is warranted and doubt any government in the Western world would take up such a policy, but what got me thinking was a comment from an individual who believes the difficulties of integrating newcomers in Canadian society, with its official policy of multiculturalism, is divine punishment for what he sees as our having abandoned Christian principles as a society. This belief in divine punishment or retribution or justice is very old and not found solely in Christianity. Though I am no longer a practicing Christian, I admit such thoughts have crossed my mind when I experienced hard times and personal tragedy in my own life. When my four year old Brittany, Juno, succumbed to cancer in 2012, I remember talking to the breeder who sold her to me, asking if there had ever been any incidence of cancer in her dogs at such a young age. She told me no and she was just as shocked and horrified as me by the news. I then asked her “is it something I have done?” “What have I done to deserve this?” The questions were essentially rhetorical, but she answered, saying no, it was not anything I had done and assured me that “God does not hand us a burden He knows we cannot bear.”

I wonder how widely held this belief is in the present, particularly across the Western world where secularism has largely taken hold. In the Western world, prior to the Enlightenment, this belief was pretty much universally held. People did not understand that the bad things that happened such as outbreaks of disease and catastrophic events such as floods, earthquakes, thunder storms, hurricanes, tidal waves, etc. had natural causes. Beyond that, they accepted their lot in society and the social order as divinely ordained. Christianity was the dominant religion across the Western world and the faithful behaved according to its doctrines believing that sinning could provoke the wrath of God. When the Black Death struck Europe in the 14th century, killing an estimated 75 to 200 million people, people believed this was divine justice meted out on sinful humanity. In desperation, many people took up flagellantism in an effort to atone for their sins and entreat God to stop the Black Death. Another response among the Christian population of Europe was to assign blame on others for having brought down the wrath of God.  Jews, friars, foreigners, beggars, pilgrims, lepers and gypsies were singled out and killed by mobs of frightened people who thought they were to blame for the Black Death. In August 1349, pogroms were unleashed against the Jewish communities of Mainz and Cologne. In February of that same year, the citizens of Strasbourg murdered 2,000 Jews. By 1351, 60 major and 150 smaller Jewish communities were destroyed. (Wikipedia)

We understand in the present that it was a pathogen, Yersinia pestis, carried in fleas which lived on rats which were ubiquitous in the filthy streets of European towns and villages during the Middle Ages that caused the Black Death. There was nothing divine, nor just behind the Black Death. It was an entirely natural phenomenon. Back to the present and the current tensions between the Western and Islamic worlds, the events of September 11, 2001, that terrible day, resonate. Just as the Black Death had nothing to do with divine justice, the September 11 attacks on the United States by Al Qaeda were none of God’s doing. While flagellantism has long since fallen by the wayside in the Western world (the Roman Catholic Church declared it heretical centuries ago), blame throwing persists. I remember in the immediate aftermath of this crisis, among the varied responses, hearing this choice quote from Jerry Falwell:

The abortionists have got to bear some burden for this because God will not be mocked. And when we destroy 40 million little innocent babies, we make God mad. I really believe that the pagans, and the abortionists, and the feminists, and the gays and the lesbians who are actively trying to make that an alternative lifestyle, the ACLU, People for the American Way — all of them who have tried to secularize America — I point the finger in their face and say ‘you helped this happen.’ (as cited in Jerry Falwell Quotes)

Just as the September 11 attacks had nothing to do with God, neither were the groups singled out by Jerry Falwell at all to blame for this atrocity. Human folly is the sole culprit in this case. Thankfully, most people living in the present, in the United States and across the Western world, know this and have not turned on these groups singled out by Falwell. In addition, in spite of a slew of Al Qaeda inspired attacks on the Western world since the September 11 attacks, the 7 July London bombings in 2005, for example, the response across the Western world was measured. Suspects in the September 11 attacks and the 7 July London bombings were identified, arrested and prosecuted in accordance with due process of law. The kind of thinking espoused by Falwell and like minded individuals really has no place in the present; it is a remnant of the Middle Ages and that is where it should remain.