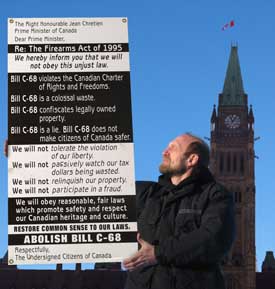 The Canadian Firearms Program, a component of the Canadian Firearms Act, a stupid law, drafted by the Liberal government led by Prime Minister Jean Chretien and enacted in 1995, burdens peaceful and law-abiding hunters, sport shooters and gun collectors with oppressive regulations. Moreover, it enables belligerent and defiant bureaucrats in the Royal Canadian Mounted Police (RCMP) to arbitrarily order the prohibition and confiscation of legally acquired and owned firearms. The decision to proceed with this policy was rooted in the moral panic that arose following the mass murder of fourteen women at an engineering school in Montreal in 1989. Moral panic is defined as “an intense feeling expressed in a population about an issue that appears to threaten the social order.” (Jones, M, and E. Jones as cited in Wikipedia)  Following this tragedy, Canadian gun owners were singled out as a menace to the social order. This was not the first time in Canadian history that a federal government responded to a moral panic in pushing forward with stupid legislation, against the counsel of advisors from within its ranks. A stupid law that resulted in the oppressive regulation and confiscation of property from a segment of the population in Canadian society who were unjustly deemed to threaten the social order. END_OF_DOCUMENT_TOKEN_TO_BE_REPLACED