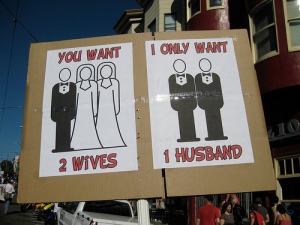 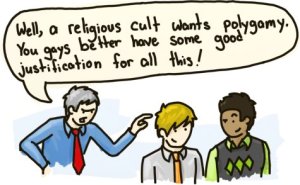 Polygamy is a broad term and when applied to human society refers to plural marriage which means having more than one spouse. Facets of this term include polygyny which refers to a form of plural marriage in which a man is allowed to have more than one wife. Polyandry describes the form of plural marriage in which a women has more than one husband. Polyamory is a form of plural marriage where a family consists of multiple husbands and wives at the same time. These kinds of marriages existed historically in human societies and continue in some societies in the present. However, in the Western world monogamous marriage (between one man and one woman) became the norm and was enshrined in law with the rise of the Roman Empire and the ascendance of Christianity as the dominant faith. In the current controversy over same sex marriage raging across the U.S. critics and opponents of same sex marriage often refer to polygamy as a reason to deny marriage rights to same sex couples. The common assertion is that if monogamous marriage is redefined to allow same sex couples to marry, then people who want to enter into polygamous marriages will demand the right to to so pointing to the fact that same sex couples are free to marry. Is there any merit to this claim? END_OF_DOCUMENT_TOKEN_TO_BE_REPLACED