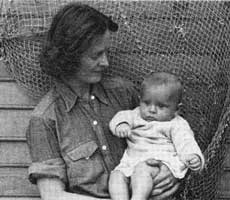 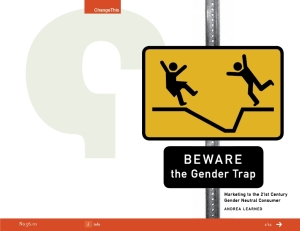 Gender neutrality or gender-neutralism or the gender neutrality movement is a topic that keeps cropping up in discussions across the blogosphere. These terms describe “the idea that policies, language, and other social institutions should avoid distinguishing roles according to people’s sex or gender, to avoid discrimination arising from the impression that there are social roles for which one gender is more suited than the other.” (Wikipedia) At face value, this looks quite reasonable. Historically, the division of labour in the Western world was based on sex. Men worked outside the home and were mobilized in times of war to fight; whereas, women worked in the home and acted as a reserve labour force when the men were away fighting in wartime. In the present, men and women work alongside one another in the labour force and the military. Sex or gender-based segregation is mostly a thing of the past, but for a very long time, it was a reality. Some occupations and past-times were denied to women because they were deemed unsuitable for women.

The absurdity of this historical reality is illustrated in the life and times of Frances Hammerstrom (1908-1998). Frances Hammerstrom led an exciting life. Born to a wealthy family in Boston, Massachusetts, she developed an interest in the outdoors, nature, wildlife and hunting at a time when these interests were considered “unladylike.” Her father and brothers were keen hunters, but she was excluded from their hunting expeditions while growing up, going hunting in secret with boyfriends who, like her father and brothers, had a passion for hunting, but would allow her to take part. She documents this and her experiences as a lady hunter, in her autobiography Is she coming too? Memoirs of a lady hunter. Her autobiography is an excellent read. The title comes from the question her husband Frederick’s hunting buddies typically asked (Is she coming too?) when she accompanied him on hunts. She relates how she overcame the prejudices against women working in what were considered manly occupations, shared in her day, and have a career in wildlife management. The Hammerstroms raised two children, Alan and Eva, while pursuing their careers.

While distinguishing roles according to people’s sex or gender is no longer appropriate in the Western world, the vagaries of the gender neutrality movement have given rise to a bizarre and troubling fad known as “gender-neutral parenting.” In short, proponents of gender-neutral parenting insist there is no difference between boys and girls, except in the gender roles said to be applied to them. There is a preschool in Sweden called Egalia, where masculine and feminine pronouns are not used in referring to the children. There are no boys and girls in class at Egalia; there are friends, and rather than using the masculine han (he) and the feminine hon (she), they employ a neologism, the pronoun hen which is held to be gender-neutral. Gender is viewed as a “social construction” by the founders of Egalia and like-minded proponents of gender-neutral parenting. What this means, they assert, is that gender, as it is “socially constructed” (that is, as it is currently understood), is not an inevitable result of biology, but highly contingent on social and historical processes. They maintain our present understanding of gender is harmful, particularly to women, and should be at the very least modified or at best eliminated.

Tanja Bergkvist, a Swedish blogger, is critical of this fad. She observes in discussing what proponents of gender-neutral parenting who believe there exists “a hierarchy where everything that boys do is given higher value, but I wonder who decides that it has higher value. Why is there higher value in playing with cars?” (as cited in CBS News) What this leads to, in the zeal of practitioners of gender-neutral parenting, is a drive to modify or abolish what they view as the current understanding of gender. What this means, as Jay Belsky, a child psychologist at the University of California, Davis, notes is “the kind of things that boys like to do — run around and turn sticks into swords — will soon be disapproved of. So gender neutrality at its worst is emasculating maleness.” (as cited in CBS News)

Boys naturally engage in rough and tumble play. There is nothing unnatural or wrong in this. Anthony Pellegrini, a professor of early childhood education at the University of Minnesota, defines this kind of behaviour as follows:

laughing, running, smiling, jumping, open-hand beating, wrestling, play fighting, chasing and fleeing. This kind of play is often mistakenly regarded as aggression, but according to Pellegrini, it is the very opposite. In cases of schoolyard aggression, the participants are unhappy, they part as enemies, and there are often tears and injuries. Rough-and-tumble play brings boys together, makes them happy, and is a critical part of their social development. (as cited in The Atlantic)

David Geary adds, “the female preference for nurturing play and the male propensity for rough-and-tumble hold cross-culturally and even cross-species (with a few exceptions—female spotted hyenas seem to be at least as aggressive as males). Among our close relatives such as vervet and rhesus monkeys, researchers have found that females play with dolls far more than their brothers, who prefer balls and toy cars.” (as cited in The Atlantic)

While it is wrong to discriminate by sex, it does not follow that boys should be emasculated based on sex-based stereotypes that portray masculinity as detrimental and harmful. Boys must continue to be free to be boys and girls free to take part in the same activities as the boys if they choose activities such as hunting, which was once largely the preserve of boys and men. Frances Hammerstrom was successful in the man’s world. She had both a career and family because of her strength of character and determination to succeed. Pretending that there are no differences, aside from the obvious, between boys and girls and how they grow and develop is just foolishness. I hope this fad of gender-neutral parenting ebbs away before anyone is harmed.

8 thoughts on “A hallucination is a fact, not an error; what is erroneous is a judgment based upon it. — Bertrand Russell”