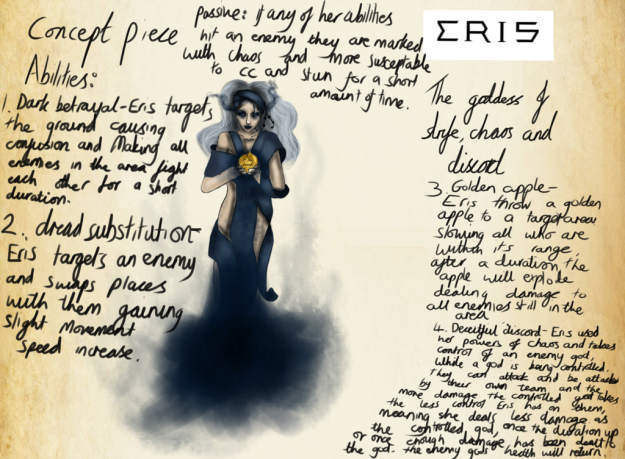 Growing up I really enjoyed reading books of fairy tales, folklore, legends and myths. I especially enjoyed the books of ancient Greek myths I found at school. These were adaptations of the stories suitable for children, not the original texts in translation, of course. Of these stories, the one featuring Eris, the goddess of strife and discord, and the apple of discord was a favourite. In short, in the story the apple of discord is a golden apple with the inscription “for the fairest” the goddess Eris threw among the gods. Just who among the gods was fairest was open to question and led to disagreement between the goddesses Athena, Hera and Aphrodite over who among them was the fairest. What started as petty bickering between the three goddesses over this question ultimately brought about the Trojan War. The moral of the story as Timothy and Susan B. Gall note in The Lincoln library of Greek & Roman mythology refers to “the core, kernel, or crux of an argument, or a small matter that could lead to a bigger dispute.” (as cited in Wikipedia) What made me think of this story in the present is the discord generated by Motion 103 Systemic racism and religious discrimination, introduced in parliament on December 5, 2016 by the backbench Liberal MP from Mississauga Iqra Khalid and passed on March 23, 2017.

The introduction of motions in parliament by backbench MPs is typically an innocuous course of business. In this case, the motion called on parliament to address the issues of systemic racism and religious discrimination. Fair enough, but then at the core of the motion is inserted a word open to question: Islamophobia. The text of the motion M 103 Systemic racism and religious discrimination is as follows:

That, in the opinion of the House, the government should: (a) recognize the need to quell the increasing public climate of hate and fear; (b) condemn Islamophobia and all forms of systemic racism and religious discrimination and take note of House of Commons’ petition e-411 and the issues raised by it; and (c) request that the Standing Committee on Canadian Heritage undertake a study on how the government could (i) develop a whole-of-government approach to reducing or eliminating systemic racism and religious discrimination including Islamophobia, in Canada, while ensuring a community-centered focus with a holistic response through evidence-based policy-making, (ii) collect data to contextualize hate crime reports and to conduct needs assessments for impacted communities, and that the Committee should present its findings and recommendations to the House no later than 240 calendar days from the adoption of this motion, provided that in its report, the Committee should make recommendations that the government may use to better reflect the enshrined rights and freedoms in the Constitution Acts, including the Canadian Charter of Rights and Freedoms. (Parliament of Canada)

The word Islamophobia is a neologism and came into common parlance in the 1990s. The Oxford Dictionary defines Islamophobia as the “dislike of or prejudice against Islam or Muslims, especially as a political force.” (Oxford Dictionary) The Encyclopedia of Race and Ethics adds to the definition Islamophobia is “an outlook or world-view involving an unfounded dread and dislike of Muslims, which results in practices of exclusion and discrimination.” (As cited in Wikipedia) While these definitions of Islamophobia are clear, the problem as Robin Richardson, a former director of the Runnymede Trust (a race equality think tank in England) notes is in practice “it fails to distinguish between people who are against all religion from people who dislike Islam specifically; and that the actual issue being described is hostility to Muslims, “an ethno-religious identity within European countries”, rather than hostility to Islam.” (as cited in Wikipedia) The point raised by Robin Richardson is an issue in Canada also. Currently, the Standing Committee on Canadian Heritage is following up on the recommendations put forward in motion M-103 and hearing witnesses with a plurality of views regarding the motion. Of those witnesses appearing before the committee delegates from the Frog Hollow Neighbourhood House  advised that the federal government “should strengthen laws against hate speech and crimes by providing a much more clear and inclusive definition of hate crime and Islamophobia.” (National Post)

This lack of clarity concerning the definition of the term Islamophobia fans the flames of discord in that anyone, religious or not, who challenges or criticizes Islam is immediately labelled Islamophobic, meaning they are accused of attacking Muslims rather than addressing their set religious beliefs. I find this distressing as I count among my friends observant Muslims with whom I have no quarrel as fellow human beings. At the same time, I am an equal opportunity critic of religions and make no exception for Islam. Canada is a country in which religious liberty, namely “freedom of conscience and religion” is guaranteed in the Canadian Charter of Rights and Freedoms. People are free to practice their faith or no faith at all as the case may be, but no one is obliged to agree or like any of the plurality of faiths people practice in Canada. It remains to be seen if the Standing Committee on Canadian Heritage will heed calls from witnesses asking that the committee provide a much more clear and inclusive definition of hate crime and Islamophobia. Until then the petty bickering regarding what is and is not Islamophobic will continue unabated and to what end God only knows.