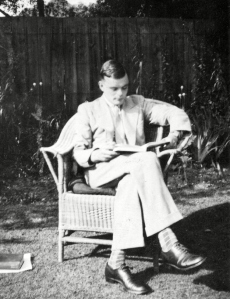 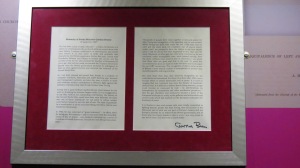 While Mika and I were enjoying our two weeks holiday in England last month among the sites we toured was Bletchley Park. This was especially of interest to Mika as he has a degree in computer science and mathematics from Queen’s University. Bletchley Park was the seat of British Intelligence, Government Code and Cypher School (GC&CS or GCCS, later renamed Government Communications Head Quarters GCHQ), during the Second World War where Axis radio transmissions were intercepted and decrypted. Those who worked there in the strictest secrecy and security made an invaluable contribution to the Allied war effort. Of those who worked at Bletchley Park during the Second World War was a mathematician and pioneering computer scientist named Alan Turing. It is held that “Turing’s brilliant ideas in solving codes, and developing computers to assist break them, may have saved more lives of military personnel in the course of the war than any other.” (Turing Biography) He is commemorated at Bletchley Park for his service to his King and country with a sculpture and a copy of the Letter of Apology from the British Government for the injustice he suffered following the war for having been identified as a “known homosexual,” an injustice that ruined his career, reputation, health and led to his suicide. END_OF_DOCUMENT_TOKEN_TO_BE_REPLACED