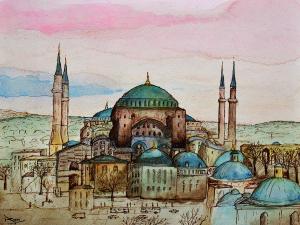 The Hagia Sophia has become the focal point in Turkish society’s current struggle between secularists and Islamists. The Republic of Turkey was founded in 1923 as a secular, parliamentary democracy with a president as head of state. In 1935, the Hagia Sophia was converted into a museum and opened to the public by the Turkish government led by Mustafa Kemal Atatürk (1881-1938). It became a major tourist attraction in Istanbul. It was turned into a museum, presumably, to reconcile the troubled history between Christianity and Islam with the realities of Turkey’s modern, secular state. The Hagia Sophia was the seat of Orthodox Christianity, the Patriarch of Constantinople, for several centuries (537–1204), a Roman Catholic cathedral from (1204–1261) and back to the Orthodox Church (1261–1453) until the conquest of the city by the Turks. It served as the first of several Imperial Mosques for the Ottoman Empire from 1453-1931. In the present, the drive to restore the Hagia Sophia as a mosque gained momentum. In 2013, Turkish Deputy Prime Minister Bulent Arinc, expressing this desire, said: “We currently stand next to the Hagia Sophia Mosque… we are looking at a sad Hagia Sophia, but hopefully we will see it smiling again soon.” (as cited in Ansa med) On July 10, 2020, President Erdogan signed a decree, ordering the restoration of the Hagia Sophia as a mosque. END_OF_DOCUMENT_TOKEN_TO_BE_REPLACED