The publication of the Wolfenden Report in 1957 was a landmark in the movement that led to the destigmatization of homosexuality across the Western world in that it brought about the decriminalization of male homosexuality in England and Wales in 1967. The repeal of the Criminal Law Amendment Act 1885 (48 & 49 Vict. c.69) accomplished this. Section 11 of the Act, in particular the clause known as the Labouchere Amendment, applied to male homosexuality. In short, the clause provided for a term of imprisonment “not exceeding two years”, with or without hard labour, for any man found guilty of “gross indecency” with another male, whether “in public or in private”. In 1953 the Home Secretary, David Maxwell Fyffe, referred to male homosexuality as a “plague over England,” and vowed to wipe it out. In 1954, the Departmental Committee on Homosexual Offences and Prostitution was convened with John Wolfenden appointed chairman. END_OF_DOCUMENT_TOKEN_TO_BE_REPLACED

Nothing new has been published on the blog the past couple of weeks as Mika and I were on holiday in England from the 10th-25th of September. We stayed in London with our friends Des and Keith. This was Mika’s first trip to the British Isles. I lived there as a boy from 1968-1970 and went back for a holiday on my own in 2005. We had a really good time taking in various historic sites such as the Tower of London, the Monument, Westminster Abbey, Hampton Court, Handel House, the British Museum, the Museum of Natural History and the British Library. I will add I was a little disappointed with how commercialized London has become. The sense of British identity I remembered from my boyhood and wanted to see again really seems watered down in London in the present. There is a plethora of shops and kiosks where cheesy trinkets are hawked to tourists and some of the historic sites, notably the Tower of London, have the feel of a theme park to them. The next time we visit England we will take in more of the sites maintained by the National Heritage Trust as I understand these better represent British identity. 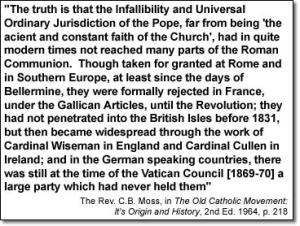 The papacy was in a very precarious position when Pope Pius IX convened the First Vatican Council on June 29, 1868. The drive for Italian unification was underway, with a revolution in 1848 that led to the exile of Pius IX in the castle of Gaeta in the Kingdom of the Two Sicilies from November 24, 1848, until his return to Rome in April 1850. The revolutionaries declared the Roman Republic comprised of the Papal States and in accordance with the ideals of the Enlightenment religious liberty and tolerance was enshrined in the new constitution by article 7 of the Principi fondamentali. Prior to this development only Christianity and Judaism were allowed by law to be practiced in the Papal States. The independence of the pope as head of the Catholic Church was guaranteed by article 8 of the Principi fondamentali. While providing constitutional guarantees of religious liberty and papal authority over the Catholic Church, the framers of the Constitution of the Italian Republic curtailed the temporal authority of the Pope which was referred to as an “historical lie, a political imposture, and a religious immorality” by a reform-minded priest, Abbé Arduini. (as cited in Wikipedia) However, by June 1849 the Roman Republic was overthrown by French military intervention and Pius IX restored in office, returning to Rome and reclaiming governance of the Papal States. END_OF_DOCUMENT_TOKEN_TO_BE_REPLACED