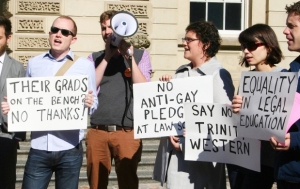 The issues of gay rights, religious liberty, and religion in Canada and the United States remain contentious. While the destigmatization of homosexuality is a welcome trend in Canada and the United States, it is by no means a fait accompli. Lawful discrimination on religious grounds against gay people remains an issue, notably in secondary and post-secondary education, as religious institutions operate and have sole proprietorship of their high schools, colleges and universities. The issue of lawful discrimination against gay people on religious grounds and opposition to it from the wider society is highlighted by recent events concerning Trinity Western University in Langley, British Columbia and Lutheran High North (a high school ) in Houston, Texas. Both schools have moral codes founded on their interpretation of Christianity that bar sexual activity outside marriage and between persons of the same sex. The schools stand firm in their opposition to homosexuality in the face of controversy and maintain they are within their rights to do so. In either case, presumably, a gay student is welcome to attend, provided they abide by the respective schools’ moral codes. It is legal in both Canada and the United States, but is it tolerable, and what is the appropriate response for those who take issue with these school policies?

The case at Lutheran High North in Houston concerns a former student, Austin Wallis, a young gay man who came out in 2014. He confided in friends and his family, then declared his homosexuality publicly in a series of videos he published on YouTube. He has a boyfriend, a young man named Nicolay, who appears in many of the videos. In the videos, Wallis professes his faith in Christianity–as defined by the Lutheran Church Missouri Synod. He and his boyfriend Nicolay conduct themselves as any other unmarried couple who subscribe to the Lutheran Church, Missouri Synod: they state in one of the videos they are not having sex. Moreover, he took care not to mention the school by name in the videos to abide by the school handbook’s morals clause, which states:

Lutheran High North reserves the right, within its sole discretion, to refuse admission of an applicant and/or to discontinue enrollment of a current student participating in, promoting, supporting or condoning: pornography, sexual immorality, homosexual activity or bisexual activity; or displaying an inability or resistance to support the qualities and characteristics required of a Biblically based and Christ-like lifestyle. (as cited in the Texas Observer)

Wallis contends the school was not satisfied with his effort to comply with its morals clause and told if he wanted to continue his studies at Lutheran High North, he would have to give up his gay advocacy on YouTube. He chose to leave the school rather than comply with its demand, which is distressing for him as he feels betrayed by the faith community to whom he remains committed. As he stated, “I am a Christian, and I love my God, and I don’t feel like this is what He would have wanted, and I don’t feel like excluding someone for who they are is anything near Christian.” (as cited in the Texas Observer) For many Christians and non-Christians alike, the stand taken by Lutheran High North is decidedly lacking in charity. Still, the fact remains as the Lutheran Church Missouri Synod has sole proprietorship over the school; their right to take this stand is guaranteed in state law. As Ken Upton, senior counsel at the LGBT civil rights group Lambda Legal, conceded, “If they’re a private school, then I think it’s game over. They’re entitled to discriminate.” (as cited in the Texas Observer)

In Langley, British Columbia, Trinity Western University was founded in 1962 by the Evangelical Free Church of America and the Evangelical Free Church of Canada. It is a private liberal arts university under the sole proprietorship of the Church. Christians and non-Christians alike are free to enroll. Still, everyone who attends Trinity Western University is expected to abide by the terms of the Community Covenant Agreement, which includes the condition that those attending Trinity Western University will voluntarily refrain from “sexual intimacy that violates the sacredness of marriage between a man and a woman.” To clarify this point, the Community Covenant Agreement stipulates, “sexual intimacy is reserved for marriage between one man and one woman, and within that marriage bond it is God’s intention that it be enjoyed as a means for marital intimacy and procreation.” It implicitly condemns sexual intimacy and marriage between same-sex couples. Still, it does not preclude a gay student from enrolling, provided they agree to abide by the terms of the Community Covenant Agreement. The wording is precise in the Community Covenant Agreement regarding the consequences of not abiding by its terms, stating: “If a student, in the opinion of the University, is unable, refuses or fails to live up to their commitment, the University reserves the right to discipline, dismiss, or refuse a student’s re-admission to the University.”

Controversy arose when Trinity Western University sought accreditation for its School of Law in 2012. In 2013, The Federation of Law Societies of Canada and the BC Minister of Advanced Education agreed to accreditation for the School of Law. Following this decision, early in 2014, accreditation approval was granted by the Law Societies of BC, Alberta, Saskatchewan, New Brunswick, Prince Edward Island, and Yukon. However, approval was rejected by the Law Society of Upper Canada and the Nova Scotia Barristers’ Society because of opposition to the Community Covenant Agreement based on its implicit discrimination based on sexual orientation. The Council of Canadian Law Deans articulated this opposition, stating in a letter addressed to The Law Society of Upper Canada in 2012: “Discrimination based on sexual orientation is unlawful in Canada and fundamentally at odds with the core values of all Canadian Law Schools.” (Canadian Council of Law Deans) By the end of 2014, the Law Society of BC had a change of heart and reversed its approval for the accreditation of the Trinity Western University School of Law, lawyers in New Brunswick voted against the School of Law, and the BC Minister of Advanced Education revoked his consent for accreditation.

The Trinity Western University School of Law responded to this turn of events in filing legal challenges against the Nova Scotia Barristers’ Society and the Law Society of BC in December 2014. In January 2015, Justice Jamie S. Campbell of the Supreme Court of Nova Scotia ruled in favour of accreditation for the School of Law, noting in part the following:

People have the right to attend a private religious university that imposes a religiously based code of conduct. That is the case even if the effect of that code is to exclude others or offend others who will not or cannot comply with the code of conduct. Learning in an environment with people who promise to comply with the code is a religious practice and an expression of religious faith. There is nothing illegal or even rogue about that. That is a messy and uncomfortable fact of life in a pluralistic society. Requiring a person to give up that right in order to get his or her professional education recognized is an infringement  of religious freedom. Private religious schools are not limited to training members of the clergy, theologians, missionaries or those who want professional degrees but do not want to practise. Those institutions already do produce nurses and teachers and grant any number of academic degrees that are widely accepted. (Supreme Court of Nova Scotia)

Justice Campbell’s ruling in this matter is consistent with the opinion of Ken Upton, senior counsel at the LGBT civil rights group Lambda Legal, expressed in the case of Austin Wallis and Lutheran High North in Houston, Texas in that both Lutheran High North and Trinity Western University are entitled to discriminate on religious grounds. Religious liberty and religious pluralism are, as Justice Campbell notes in his judgement, a messy and uncomfortable fact of life in a pluralistic society. While it is distressing for Austin Wallis that he felt compelled to leave Lutheran High North rather than comply with its morals clause, he is free to practice his faith at another school, just as anyone forced to make the same choice concerning attendance at Trinity Western University is free to choose to continue their studies at Trinity. For those who choose to live according to the moral codes of these schools in seeking a professional education, it is incumbent on the wider society to tolerate the existence of these schools and the religious values they represent.

1 thought on “The Lord is my Shepherd and he knows I’m gay. — Troy Perry”