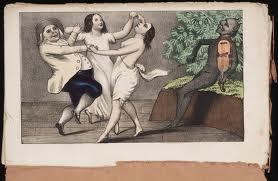 I was born and raised in the LDS (Mormon) church, and left during my teen years. To many, Mormonism is not considered a Christian religion, though Mormons consider themselves to be Christians and believe in the Bible. There is some overlap, as well as some contradiction, in the teachings of the Bible and the Book of Mormon. Seeing as Mormonism is what some would call a fringe sect of Christianity, Geoffrey recently asked me to share a few thoughts about the Mormon view of Satan.

Much of the Mormon version of Satan is in keeping with the traditional Christian version. To be honest, I have a hard time remembering which bits of doctrine are distinctly Mormon, and which come from the Bible. One could say that the lines are blurred, so to speak. But the “origin story” of Satan as far as Mormonism is concerned is as follows.

Before we were put on this earth, we were spirits in Heaven. We were all children of god, but we desired to have a physical body of flesh and blood, as he did. It is for this reason that god created the earth. We would come to earth to be put to a spiritual test, and if we passed, we would get to return to Heaven in our physical bodies. Two plans were proposed to god. One by Jesus Christ, the other, Satan (also called Lucifer). Satan’s plan was to not allow us, his spiritual brothers and sisters, to have the power of free agency or choice. His plan was designed to ensure that each and every one of us would be able to succeed in our test on earth, so that all of us would be able to live in Heaven with our Heavenly Father for all eternity.

Jesus’ plan, however, was to allow each of us to have free agency, or, the right to choose between good and evil. God chose Jesus’ plan, as it was a better test of worthiness. Satan became angry and waged a war against god, Jesus, and those who sided with them. It is said that one third of Heaven sided with Satan (how do we know that?). The one third that was on Satan’s side lost the war in Heaven, and was cast out forever, never to be given bodies.

It is in this way that Satan and his followers tempt us. They do not have physical bodies, so they are able to both infiltrate and be cast out of a room, area, etc. It is very curious that Mormons do not believe Satan has a physical body, because Brigham Young, the second president of the church, stated that apostates (people who leave the church) “will become gray haired, wrinkled, and black, just like the devil” * How on earth can a spirit have dark skin? Either he has a body, or he doesn’t. One without a body cannot have dark skin on that body which does not exist.
Not all Mormons subscribe to this bit of doctrine, and the church has even made efforts to cover the Journal of Discourses up, as it is riddled with absurdities (including a statement that people live on the surface of the sun).

I don’t think I’ve ever seen any official church doctrine teaching this, but I have heard it be said in the Mormon church that Satan is a homosexual. I repeat, this opinion is not official doctrine of the church. It doesn’t surprise me, though, that some members of the church believe this. They believe that Satan is the source of all evil, and seeing as they believe homosexuality to be immoral, it’s not hard to understand that some Mormons think of Satan as possessing this particular trait.

So there you have it, folks. Mormon Satan is an invisible, black, gray haired homosexual. I do adore the Mormon, and even Christian, Satan. He is an incredibly intriguing character, and the Mormon “origin story” would make a GREAT fantasy movie. Perhaps I’ll make that movie one day, and play Satan myself. It will be deliciously evil.